Mountain bikes were invented in the late 1970s. And although primitive fat bikes have been around much longer, they didn’t become popular until the modern fatbike showed up on the scene in the late 1980s. But what’s the difference between a mountain bike and a fat bike?

In this article, we’re going to take a look at the difference between a mountain bike and a fat bike. First, we’ll explain the differences between the bikes and how you ride them. Then, we’ll give you an idea of how much they cost. But first, let’s look at what makes them each unique.

The Difference Between a Mountain Bike and a Fat Bike

The most obvious difference you’ll notice between mountain bikes and fat bikes is the tires. Fat bike tires are typically 3.8″-5.2” wide (96-132mm). On the other

hand, MTB tires typically measure 1.9”-2.6” wide (48-66mm). That’s such a big difference that fat bike tires will also need wider rims. In addition, fat bike tire pressure can be as low as 5 to 14 PSI, while mountain bikes are generally 22 to 35 PSI. The lower tire pressure disburses the weight more, so the bike won’t sink as deep in snow or sand.

Because of the potential width of a fat tire, the fat bike needs to have lots of frame space to accommodate big tires.  You will see a frame designed with a wider flaring seat stay, chain stay, and fork.  Without these modifications, there would be a natural limiter on how wide a tire you can run.  A mountain bike, on the other hand, is built with a much more traditional frame design.

A less noticeable difference between mountain bikes and fat bikes is the size of the hubs. The hub is the center part of the wheel that attaches the wheel to the bike frame. It allows the wheel to spin freely. Because a fat bike tires are so wide, the hub also has to be wide. Since the tires on a mountain bike are thinner, the hub can also be thinner.

This also affects the pedals. Sometimes called the Q Factor, this represents how far apart your pedals are from each other. On a mountain bike, the pedals are more 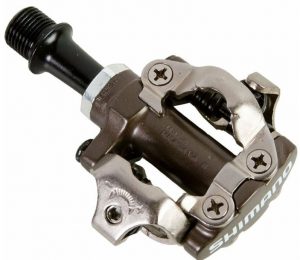 in line with your hips. The pedals are typically farther apart on a fat bike than on a mountain bike. This may cause discomfort in your knees and hips over time.

On both fat and mountain bikes, riders typically go with SPD-style pedals and cleats.

Both types of bikes typically have disc brakes. Disc brakes offer better stopping power in adverse conditions and allow for wider tires than rim brakes do. They both usually have flat bars, as well. Some mountain bikes will have very aggressive geometry, while others, along with fat bikes, will have a more upright and relaxed geometry.

How the Two Bikes Are Used

Fat bikes excel at riding on soft surfaces. You can ride them in deep snow or soft sand. They’ll also ride well over loose gravel and even mud. If you are new to off-road riding, the big soft tires of a fat bike can be very forgiving, giving you extra traction and plenty of comfort. But fat bikes won’t ride fast, and they take a lot of effort to pedal. The wide soft tires have a lot of rolling resistance, the bikes are very heavy, and they don’t have a lot of gears for speed. 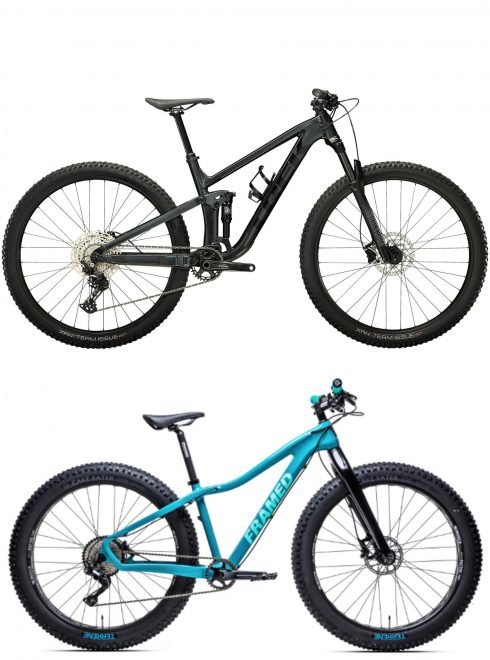 Since the fat bike has a wide Q Factor, it can also use your muscles a little bit differently, which can make it harder to ride.

Since fat bikes are meant for softer surfaces, they don’t really have suspension systems. As a result, handling on a fat bike is slower and may feel laggy. This is ok because when you’re traveling in snow or sand, you don’t want to make any sudden changes in direction, or you might skid.

Mountain bikes, on the other hand, have wider, knobbier tires than a road bike but less so than a fat bike. They still have plenty of grip and soft tires, just not as much as a fat bike. MTBs are also made for off-roading, but they’re meant to accommodate harsher surfaces, such as rock gardens and roots. Mountain bikes need to be able to make quick changes in direction and handle sharp drops and hard hits. So the suspension systems will help absorb some of the changes and give extra traction.

If someone is looking for more speed, we suggest they also consider a gravel bike. When comparing a mountain bike vs. a gravel bike, the gravel bike certainly is geared for faster riding on hardpack trails or pavement.

You can find bikes of any type in a range of costs from a number of different manufacturers. However, remember that the most well-known MTB makers probably aren’t at the forefront of fat bike sales.

You can purchase low-budget fat bikes and mountain bikes for as little as $500. There’s nothing wrong with low-budget bikes, but if you want a bike that will last longer and work better, you’ll want to invest a little more money.

For example, Specialized offers a variety of mountain bikes in a price range of $1000 to almost $7000, depending on the frame material and components. Canyon, on the other hand, makes both fat bikes and mountain bikes. But they only have one fat bike, which is less than $2000. So instead, they have ten different mountain bikes with a variety of options, ranging in price from $700 to over $10,000.

Since fat bikes are even more niche than MTBs, they’re harder to find. The Giant Yukon and the Trek Farley are probably the most popular Fat Bikes, which cost $2100 and $2600, respectively.  Many fat bikes are made by smaller niche makers (which we are actually big fans of) like Surly and Salsa.

Which Bike Should You Choose?

Amanda Whittington is an accomplished adventure cyclist, having done some of America’s iconic bike races, century rides, gravel grinders, cross-country races, and is currently training for track racing.  A ride leader and organizer, Amanda is passionate about cycling and teaching others, and works with beginner riders, teaching them group riding and bike safety as well as basic bike know-how.