I like to call my gravel bike my all-road bike because it goes on just about every kind of road. Mountain bikes, however, can be a little more terrain-specific. And while there is a lot of cross-over between the two types, there are a lot of differences and nuances, too. Keep reading to see just what those differences are, and how you use this information to identify the best bike for you!

One of the most apparent differences between a gravel bike and a mountain bike is the handlebars. Gravel bars have drop bars – that is, handlebars that curve down. A drop bar gives you a variety 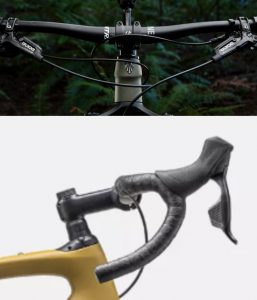 of hand positions to reduce fatigue over long rides and helps you get into a more aggressive position with a lower center of gravity for fast descents.

Mountain bikes, on the other hand, have flat bars. These wider bars keep the bike from feeling ‘twitchy’ and give you better steering over technical sections.

The suspension system reduces the amount of vibration and bumpiness you feel when you ride over rough terrain. It also helps keep the wheels in better contact with the ground, which gives you much more traction.

So if you’re just riding on gravel trails and roads, you don’t need a suspension system. But if you’re bombing it downhill, climbing over rocks and roots, you’ll want one to make your ride more comfortable and safer.

The type of tires will also add weight to the bike — and mountain bike tires are larger. 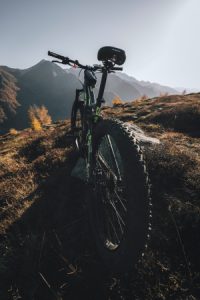 Tires on a gravel bike will be a little wider than on a road bike. For gravel, you’ll run anywhere from a 36 to 45 mm wide tire (although some of the newer models can handle up to 50, or even a tick higher). This tire width gives you extra comfort and traction compared to a road bike. However, most gravel bikes won’t be able to fit a tire wider than 45mm.

Mountain bike tires are even wider. Cross country, or XC bikes, typically have a range of 2.1 to 2.4-inch tires. Downhill bikes may go as wide as 2.5 inches.  Fat bike tires, which are not mountain bikes but somewhat similar, routinely get up to 3 and 4 inches.  The mountain bike vs. fat bike comparison is a different one altogether, so let’s not get hung up on that.

The wider the tire, the more comfort and the more traction you’ll get, but the slower you’ll go on a paved road.

Gearing is also different between mountain bikes and gravel bikes. Many gravel bikes will use standard road bike gearing. However, you might also find something like a single 40t chainring with either a 10-42 tooth cassette or even a 1 – 52 tooth cassette if you’ll be doing more climbing.

Mountain bike gearing is a little different. They generally use a 1x gearing setup since cadence isn’t a priority like it can be in faster gravel riding. So you’ll have a 30 or 36-tooth chainring with a 10 – 52 tooth cassette for easy riding uphill.

In short, a gravel bike will give you gearing that allows you to pick up nice speed on flats and pavement.  A mountain bike has gearing that is much better a low speeds and uphills, but you will sacrifice top-end speed.

Mountain bikes, on the other hand, are rarely ridden on the road, even with slick tires. However, they can be used on gravel, easy trails, hard pack dirt, as well as mud, and rough terrain such as rock gardens and downhill trails.  A very skilled cyclist can take a gravel bike on a lot of single track, but a mountain bike is much more forgiving if you pick a bad line.

If you plan to be on really rough terrain, the riding position on a mountain bike will make you feel much more stable and secure than a gravel bike. 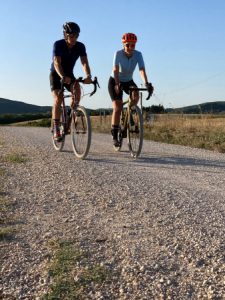 Gravel bikes have a shorter wheelbase and a more upright head tube angle. This gives them more agility at higher speeds and a tighter turning radius. On the other hand, mountain bikes tend to have a longer wheelbase and a more slacked-out head tube angle, resulting in a wider turning radius but much more stability when you’re speeding downhill over obstacles like roots and rocks.

Combined with the wider bars, this results in mountain bikes that much more stable over rough terrain. It also keeps you from oversteering tight turns, which will throw you off the bike. With their thinner drop bars, Gravel bikes might seem twitchy compared to mountain bikes because they’re designed for smoother surfaces where you don’t need quite as much grip. This means you can turn tight corners with ease.

On the other hand, a mountain bike can take those rough obstacles with a lot more finesse, while a gravel bike will bounce off of rock gardens and roots, making for an uncomfortable ride at best.

When you are on a winding single track path, you will feel more secure and confident on a mountain bike than a gravel bike.

A gravel bike will be faster on paved surfaces and gravel roads than a mountain bike. But, on the other hand, a mountain bike will sail downhill quicker when it comes to steep descents and rough trails.

The speed advantage from a gravel bike comes from two things: It’s gearing, and the rider posture.  It is borderline a road bike when you are on a nice, smooth flat straightaway. 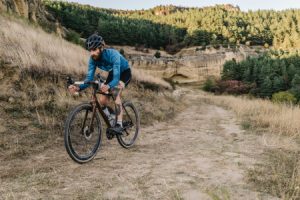 Gravel bikes are usually intended for longer distances than mountain bikes. Your gravel bike can be used for everything from bikepacking to gravel racing. Since it’s lighter, you can spend more time climbing. And because it has similar gearing to your road bike, you can throw on a slick pair of tires and take it on the road, too.

Your mountain bike is usually used for shorter distances since it’s heavier and slower uphill. But its heavier weight will help you fly downhills!

If you’re trying to decide between a gravel bike and a mountain bike, choose the bike based on the type of terrain you’ll be riding if you’ll be leaning more towards easy trails and gravelly roads, lean towards a gravel bike. If you love bombing down rock gardens and over roots and obstacles, you might need a full-suspension mountain bike.

On the other hand, you can often take a sturdy gravel bike on an XC trail and a lighter mountain bike on a gravel road. The choice comes down to your skill level, confidence, and personal preference.