The Garmin Edge 830 was released in May 2019 and it’s still going strong in 2022. It is a strong contender on our annual list of the best bike computers. If you’re looking to add a new bike computer to your bicycle, you’ll definitely want to give this one a good bit of consideration. So what makes this bike computer tick? Is it worth the purchase? And how does it stand up against other Garmin bike computer products? 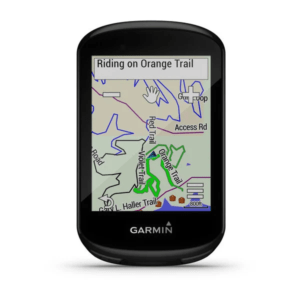 The Garmin Edge 830 came after the 820, an already impressive device which had been around since mid-July 2016. Giving you much needed directions when you’re out on a ride, it also has the capability to monitor your performance and give you the insights you need to keep pushing forward.  At sub-$400 in most outlets, the 830 has an impressive list of features.

Some of the more notable ones, in our view, are:

Some of these above features were already available on the 820, so here are some things that were added or changed that makes the 830 different from the 820, in addition to an updated user interface:

Those who use the Garmin 830 Edge can also take advantage of courses, Smart Trainer Control, workout planning tools, virtual partners, calorie tracking, and other impressive features.

Compared to a fitness watch or tracker, the 830 (and all bike computers for that matter) will excel when it comes to navigation, but won’t give you a heart rate monitor.

The Garmin 830 Edge is relatively easy to set up for basic use, although we always find the first outing with a Garmin to require some tinkering and learning.  Much of the setup can be done straight through the Garmin Connect smartphone app (iPhone or Android). Power it on, fill in some personal details, and your GPS is ready to go. The bike computer can work with Bluetooth, USB, and Wi-Fi. When no Wi-fi is available, the device can connect to the internet using your smartphone via Bluetooth.

You can upload and store many rides on the device, which can be useful to pull-up past routes that you have enjoyed riding when you are out on the road or trail. Loading a route through the Garmin app is a little clunky, but we think they will improve the interface over time.  Once you get the route on your device, it’s on. 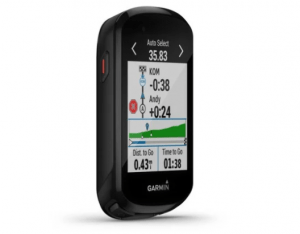 Thicker but smaller in footprint than a typical smart phone.

But for tracking and analyzing your rides and workouts, we still prefer just using Strava.  Note that when you upload a road (perhaps on that you mapped on an app or received in a file from someone else) you will just need to then upload the GPX file to your Garmin connect, and then sync it with your 830.  That whole process is perhaps a bit clunkier than we would like to see, but once you get the hang of it you will find the upload process a bit smoother.

When it comes to GPS, you can opt for normal GPS, GPS + GLONASS, or GPS + GALILEO. You can save up to 100 courses, 200 waypoints or favorite locations, and a history of up to 200 hours. Coming with a barometric altimeter, accelerometer, and ambient light sensor, it has a water rating of IPX7.

The 830 is compatible with Garmin’s Rally bike power meter pedals.  Important, because not all Garmin devices are.

Garmin claims a 15 hour battery life (up from the 820 model) while using GPS.  However, our testing suggests that 15 hours might be pushing it. Perhaps we were testing in areas with a higher-effort connection to the GPS signal. GPS is know to cut out around trees or tall buildings.

We would be comfortable banking on 8 hours of riding per charge, but as a general rule of thumb suggest you give it a good charge before every long ride.  Still, it is better than an 820, and as with most electronics, the battery will be best when the unit is on the newer side.

As with any electronic, brutal cold may impact the battery life.  If you are a cold-weather rider, you may want to err on the side of charging the device a little more often.  Generally speaking, though, the battery life of Garmins — from running watches to bike computers — is pretty darn good compared to the market.

Mounting the 830 is pretty much like mounting the other Garmin devices.  The unit comes with a mounting kit, which does not rely on any hardware or screws.  Instead, you simply secure the mounting pad with heavy-duty, built-for-purpose rubber bands (all come with the Garmin) on the stem or the handlebar.  Then, the device sets in to the pad and with just a quarter-turn it is secured.  This process works for the 530, 820, 830, 1030, whatever you are using. 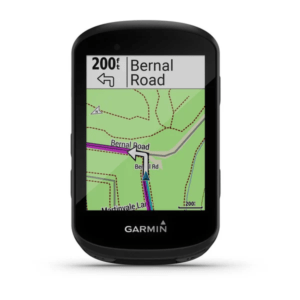 The Garmin Edge 530 was announced at the same time as the 830, replacing the previous model (520), so how do they compare against one another? They are actually almost identical and have a majority of the same features. The only major difference? The 530 does not have a touchscreen. It instead only comes with buttons for navigation through the bike computer.

A few other differences to note:

How Does It Rate Against the Garmin Edge 1030? 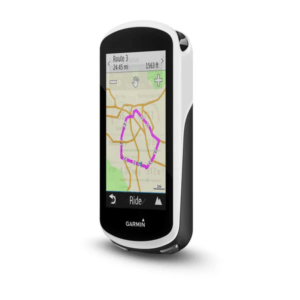 Another bike computer we should look at from Garmin is the Edge 1030. Released in August 2017, it is older than the 830, but it is kept up to date with regular firmware updates and features.

We did an entire Garmin Edge 1030 Plus Review.  Check it out if you are seriously comparing the two computers.

The two bike computers are very similar: touchscreen, 20 hour battery life with GPS, mapping and route creation, same features and apps, and same connectivity capabilities. The major differences between the 1030 and the 830 are:

Is the Touch Screen Worth it on the Garmin 830?

Yes. In fact, once you use a touch-screen bike computer, we don’t think you will want to ever go back.  Think about it – when you are riding your bike on a road or trail, you need responsiveness and easy navigation of the screen.  The last thing you want is to have to look away from your path for even a second.  Fiddling with buttons and riding a bike is a bad combination.

The touch screen is available on the 830 and 1030, and we don’t see any reason you would not invest the roughly $100 of additional price it takes to go all touchscreen.

You might have noticed that you can buy the computer itself, or you can buy a bundle that includes the 830.  It is a pretty simple comparison of a bundle vs. non-bundle option.

If you get the bundle, you receive:  The computer, a mounting bracket, and a flush-mount bracket (so you have two options for mounting to your bike). You also get a cadence sensor for your wheel, a heart rate monitor, a speed sensor, and and a USB cable.

If you get just the computer, you will only have the computer and the 2 mounting methods, along with the USB cable.

It is really up to you if you think you will use the cadence sensor and heart rate monitor — and many cyclists already have those items from past purchases (note that Garmin heart rate monitor straps – even older ones – are highly interchangeable and usually work with any Garmin device).

There’s no doubt that the Garmin Edge 830 is a contender for best all-around bike computer, and it needs to be on your list of considerations if you’re in the market for a new bike computer.  We think you would be crazy to not get the touchscreen, versus the non-touch 530.

It has all the features you could need while you’re cycling, whether on the trail or on the road, for safety, performance, and training. If you want to save a little cash though and aren’t absolutely in need of a touchscreen, the 530 could be the better option for you and your wallet. And while a larger screen could come in handy, the price difference between the 830 and 1030 may be something that gives you pause. We are sure that the Garmin Edge 830 is a top choice.