Triathlons come in a few forms, notably with variations in the distance.  You have your super sprints, sprints, Olympics, HIMs, and the coveted Ironman.  While sprints are the most popular, the numbers for all distances have been holding steady.

But what about some of the riffs on triathlon – namely races that look a little like a triathlon but are not really the same thing?  We get those questions a lot, so we wanted to provide an overview of a few of the more common variations on triathlon, along with our perspective on race strategy if you decide to try them.

The relay is really a triathlon, but quite different at the individual level in that you would likely only do one of the three race legs.  We are big fans of the relay, because it often gets people to participate in the sport of triathlon who would not otherwise race.  Getting more participation can only be a good thing.

Much like a traditional triathlon, your team will race in the swim, bike and run legs.  Logic suggests that you should match your participants to each 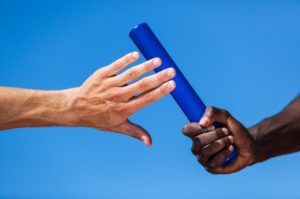 leg, making sure you get the right talent aligned with the right race leg.  We think this is even more important in the first leg, and really the second leg.  You want your team to feel like they are in the pack and having a fighting chance, so try to enlist a strong swimmer and cyclist who can keep you in the thick of things.  When you get to the run, it is less important as it is the shorter, fun leg of the race – plus, you are generally going to have an easier time finding someone who is willing to and capable of running on your team.

Why we Like Relays:  They allow people to compete in triathlon while being part of a team.  Other than relays, tri tends to be a very individualized sport.

Why we Don’t:  Relays often have very few teams competing – we have seen races with 5 or fewer relay teams – so a bit of the competitive nature is lost.

A duathlon is like a triathlon, except without the swim.  The format is typically a run – bike – run, with the run legs usually being about the same distance.  A common distance might be a 5K run, followed by a 15 mile ride, followed again by a 5K run.  As you would guess, the advantage will definitely begin to shift to those who are good runners in a duathlon.

Duathlons are popular in areas where access to a swim is not very easy, or at times of the year when attempting to do an open water swim would be difficult due to weather.  It is often a common event in the spring when triathletes are in full training mode, but it is a bit too cold to swim even in a wetsuit.

You will definitely want a run focus in your training.  Consider finding a track to do some hard intervals about once a week.

Why we Like Duathlon:  Because the swim leg is cited as the main reason many people choose not to do triathlon, this can be a good way to 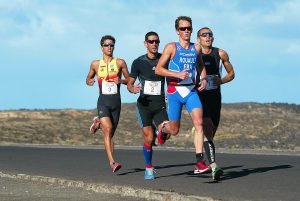 introduce athletes to multisport who otherwise may not consider doing it.

Why we Don’t:  Leaving the swim leg out eliminates one of the badges of honor of triathlon – it takes good conditioning and a strong mental game to swim across a lake.

The aquabike has been catching on in recent years, at a pace that probably surpasses the other variations on this list.  An aquabike is often a triathlon without the run.  You swim, you cycle, and then you are done.  Sure, it can be a bit of an anti-climatic finish, but at least you are racing.

The typical distance on an aquabike usually follows the race that it is part of.  If it is a sprint triathlon, then the aquabike will likely be about a ½ mile swim following by a 15-20 mile bike.  We don’t see many aquabike races done standalone – almost all are part of a large multisport event.  The longest aquabike events are tied to the HIM race – a 1.2 mile swim and a 56 mile bike.

Why we Like Aquabike:  Most participants do aquabike because they can no longer run comfortably – often due to knee issues.  It can be a great way to keep people in multisport who otherwise might have to quit.

Why we Don’t:  Due to the nature of the race, the finish can be a bit of a downer.  You don’t get the experience of running through the final gate with a crowd of supporters cheering you on.

There are many variations on triathlon.  We do races where the swim is replaced by a canoe or kayak, or where it may be a mud type of course.  Some triathlons feature mountain bike legs on dirt, and we expect to see more races with a gravel bike course give the rise in gravel riding’s popularity.

In the winter, a somewhat common multisport even simply swaps the swim with a ski, and the road bike course with a fat bike course.  They most commonly have a course with a ski / fat tire bike / run sequence.  All are interesting, and may be fun to try once, but in our opinion there is nothing quite like a true triathlon.