Triathlon Swim Starts: Wave vs. Time Trail (and others)

Since the order of events in a triathlon is always the same — swim, bike, and run, in that order — the beginning of a triathlon always involves the swim start.  However, triathlon swim starts can vary from race to race, and over time you will likely encounter several different starting approaches.  There are a couple start styles that are the most common — a wave start, and a time trial start.  Let’s take a look at each of those, as well as a couple other start types you may encounter as you get more adventurous with your races.

First, a note about what happens prior to the swim start.  Most races will involve a pre-race meeting, usually occuring 15 to 30 minutes prior to the swim start.  The meeting will mainly focus on key announcements from the director and notes about the race course.  After the pre-race meeting, it can be common for the transition area to be closed, meaning that the organizers want all racers to gather near the swim start area.  If this is the case, be sure to find some shade if it is a hot day, and take one last drink of water in case you will wait for a while for your particular wave to start.  Make sure you have your transition area setup the way you want, your race day clothing is laid out in the order you need it during the race, and you have your swim equipment with you, including your race wetsuit, goggles, hat, and your race chip.  In addition, don’t zip your wetsuit up all the way until you are closer to your start time, as it could cause you to sweat prematurely, and you need that hydration for the bike and run!

For more information on pre-race planning, be sure to check out our article on the ultimate triathlon race-day checklist.

Once you are ready to begin the race, you will find two main types of starts in a typical triathlon:

Perhaps the most common format for a triathlon start is a wave start.  A wave start typically involves splitting into “waves” which are predefined by age group and gender.  Different age groups often are given different colored swim caps.  Elites and other special waves such as Clydesdales, Athenas, or teams may have their own waves.  The wave is the same thing as a “heat”, and a typical wave will have anywhere from 15 to 50 people in it.  Most smaller races can have every wave in the water by the 20-25 minute mark, but some larger races can take up to 45 minutes. 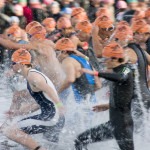 Wave starts, the most common

Waves are usually separateed by about three minutes, however we have seen as little as two minutes or as long as ten minutes separating waves.  That means that there is usually some space between the current wave of racers and the one that just went ahead of them in the water, although this spacing quickly goes away as racers proceed in the water at their various paces.  The spacing between waves, however, is often negated by the fact that you may have 15 to 50 people trying to run into the water and begin swimming at the same time.  The exaggerated horror stories of people getting kicked or grabbed usually stem from the first minute or so of a wave start race, as people jockey for position and trying to find swimming space.

Wave starts are popular because they are relatively simple, and they offer the benefit of being able to start with your particular heat which allows you to race against your age group and gender through the entire race.  For example, if you pass someone on the run from your same wave (their body will often be marked with a wave number), you know that you start with them and now are pulling ahead up them when it comes to the finish rankings.  A wave start also creates a little more of a race atmosphere at the outset, as there is often a countdown and a crowd cheering as every wave goes off and runs from the beach in to the water.

If you are nervous about a wave start, don’t be.  Unless you are doing an Ironman (where it is common for everyone in the race to start at once) there actually won’t be that many people in each wave.  If you are anxious about the swim, let most of the other swimmers in your wave go, and then slowly enter the water and begin your swim.  Remember, staying relaxed during the swim leg of a triathlon is one of the most important things you can do to have a strong swim, and to come out of the water with energy and confidence for the bike ride. 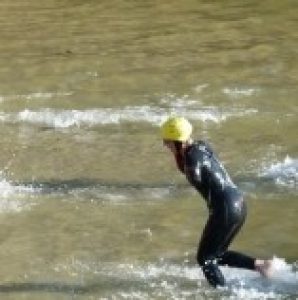 Time trial start – one at a time.

A time trial start is the other main type of race start, and is very simple.  Racers usually line up by their race number, and a starter has a racer begin every few seconds.  Three second intervals are common.  So, if there is a 500 person race, and racers begin every three seconds, it would take 25 minutes for ever racer to enter the water.  Racer number 432 would run in three seconds after racer 431, and so on.  The line moves surprising fast, and in some races, two racers enter the water at a time.

A time trial start can be a very efficient way of starting a large number of people.  It also has the inherent advantage of not having as many racers thrashing through the water at the same time, although by the time you get 100 yards into the water and people begin to space themselves out based on their personal pace, it will feel just like the swim of a wave start triathlon would.

One downside of a time trial start is naturally the fact that it can be a little anti-climatic.  With a start simply saying “go” every three seconds, there is no big countdown, no cheering for a wave of people, and frankly for spectators it can be easy to miss the person you are cheering for even entering the water.  The other downside of a time trial start is that because everyone started at a slightly different time, you never truly know how you did until you see the final results.  Because they tend to be a bit more orderly for the Race Director’s, time trial starts seem to be becoming a little more popular, but still tend to be less than 25% of the starts that we see.  You are much more likely to encounter a wave start at most races in the US. 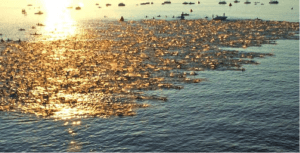 The Ironman triathlon has perhaps the most famous start type of all, a mass wave start.  This simply means that when the starting gun goes off, a couple thousand people doing the race all rush the water and begin to swim.  When people think about a chaotic swim start with people everywhere jockeying for position, they are thinking of this type of start.  While this can no doubt be unnerving for a first-time racer and very conducive to getting kicked and grabbed, it is perhaps the most exciting race start type to be a part of and watch as a spectator.  If you are training for an Ironman, it is important to visualize your start with many other people, and have a plan for how to relax and get into a good rhythm early in the race despite the large number of people around you.

Another famous, albeit uncommon, swim start is the type used in the Escape from Alcatraz and some other races.  It features every racer loading up by age group on a large barge, and then diving into the water and beginning the one-way swim when their group is called.  This differs from most races which are “run-in” from a beach and usually involve some sort of loop in the water.  You won’t find this type of start often, but if your race will have one, think ahead of time about how you plan to enter the water.

Note that this article has focused on traditional, outdoor triathlons.  For someone doing in Indoor Triathlon, the starts are entirely different.  You typically have an assigned time to enter the pool, and then your swim is timed and ultimately calculated with the indoor bike and run legs to come up with your overall placing.  Or, in the popular format that the USA Indoor Triathlon governing body uses, you swim for 10 minutes, and the goal is to get as many laps as possible in during the allotted timespan.

If you found this article useful, check out some of our freshly updated pieces on topics like: