We gave the Kuat bike racks a good look, and liked what we saw. The Kuats fall squarely in the top-end, sturdily-built, robust hitch mount rack category, and the Kuat NV 2.0 comes equipped with looks, adjustability, versatility, and ergonomics that allow it to deliver optimum performance, making it one of the better car bike racks you are going to find on the market. So let’s dig right in and see why we like the Kuat NV 2.0 a solid choice among portable bike racks.


There seems to be a bit of confusion surrounding NV 2.0 and NV Base, so let’s get that cleared up right away. With both the racks offering the capacity of holding two bikes 60 lbs. each,  the NV 2.0 has a higher price point than the Kuat NV Base. You can also expect the signature Trail doc repair stand, which is not offered with the NV Base. Also, when installed in the hitch, NV 2.0 will sit closer to your vehicle when folded down and has a glossy powder finish instead of a matte black finish like the Base. Besides that, there aren’t many other differences.

See the specs and price on the Kuat NV 2.0 here

See the specs and price on the Kuat Base here

Most people who follow the cycling equipment market know that Kuat NV 2.0 is among the most expensive brands on the market. By comparison, the Thule T2 Pro XT and Yakima Tray each come in at slightly lower price points respectively, depending on discounts at the time.

For a discerning buyer, there are some things that separate the Kuat NV 2.0.

The first key difference is in the visual aesthetics: Kuat NV 2.0 may be more visually appealing and stylish in comparison to the other two, depending on your tastes. Secondly, other racks don’t quite have the strength-to-weight ratio that you find in the Kuat NV 2.0. I mean, weighing in at only 52 pounds, it allows you to carry two bikes, and with its adjustable front tire cradle system and fully integrated hitch locks and cable locks, you can bet your bike is not going anywhere once mounted. It is basically a “no-tool install” as well with a tight hitch cam system and numerous other features that justify its hefty cost.

The Thule T2 Pro XT racks provide solid competition to the Kuat.  We think the Yakima probably comes in 3rd place of the bunch — sorry Yakima.  We would still gladly use your bike carriers though.

Let’s have a detailed look at some more of the Kuat’s key specs and what they might mean to you.

Kuat has delivered a bike rack that is at the top of the market when it comes to its features, whether that be its ease of use, the security it offers, or its style. Its sturdy design allows it to be used for long hauls.

Regarded as one of the most user-friendly bike racks on the market, it is easy to both snug up and release the ratcheting arm. It is equally easy to use the rear-wheel straps while the main mast pivot contains a lever for easy lowering and raising of the rack, which can be operated with the foot, so no need to bend down and operate the lever with hand.  That is nice when you have your hands full while cycling solo.

The adjustable tire cradle at the front and the rear ratcheting strap make it easy to load a bike on the beam. Also, the cradle can be adjusted such that it minimizes the contact between the bikes, and the ratcheting strap can be adjusted to accommodate wheelbases of different sizes.  That is nice for those who are biking as a family, or perhaps have two bikes of wildly different sizes (like a fat bike and a road bike).

As for the locks, expect nothing but the best from Kuat NV 2.0 as it comes equipped with multiple. This includes:

All the locks share the same key, which is convenient. Then there’s the powder-coated finish of Kuat NV 2.0, which is also more durable in comparison to paint finish; not only does it retain its fresh looks for a longer period, but also, it is scratch resistant.

Assembly is ideally a two person job, but is easy and can be completed with the help of clear and concise directions and tools provided by Kuat. The best approach to this is bolting the main support mast with the two sections of the tray. The main support mast can then be easily connected to the rack by aligning their holes and bolting them tight.  As with any self-assembly job, we always recommend checking the unit after the first and second uses to be sure that it is all holding together as intended.

After giving the Kuat carriers a good road test, both installing and loading, and also driving with a bike, we liked what we saw with the NV 2.0.  We did our testing with either 1 or 2 road bikes on the unit.

On the road, we found the Kuat is sturdy and solid without much bike movement. When loading and unloading, it offers easy handling for bikes that weigh as much as 60 lbs.  Because we were often using this while solo, we needed to be able to clamp the bike on to the carrier easily and with one hand, while positioning the bike. The carrier did a nice job on that front.

We also applaud Kuat for the nice job they do for shipping a product that weighs as much as it does without being damaged during the transit.  It is not easy to do, and this can be a clunky piece of equipment to ship.  The Kuat came partially assembled in the box.  What was left for us to do was snap a few pieces together, install 3 bolts and fit pre-molder pieces into each other.  You might be slightly greasy, but the whole process can be done in about 10 minutes.

Like most people who do a bunch of research on higher-end bike carriers, we would probably narrow it down to two products: Kuat NV 2.0 and Thule T2 Pro XT. A few things might tip you toward the Kuat NV 2.0, including the two separate integrated locking cables and the same key for all the supplied pin locks as big pluses. It is secure when mounted on a moving vehicle, and it is convenient to use. Given that it is a bit heavy, it is equally sturdy and built to last and withstand the elements. The rack can be tilted with the handle/pedal easily so that the backdoor of the car can easily be opened.  Depending on your vehicle’s build and design, it might cover your license plate when folded up.

We examined some of the changes of this 2.0 version against the prior version of the Kuat NV, and they made some improvements we really like 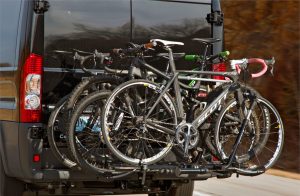 It can be said without a doubt that Kuat NV 2.0 is one of the best bike racks on the market today, along with the Thule and perhaps the 1Up brand. A sleek finish, stylish design, and premium features make it truly stand a class apart. Few if any negative reviews in terms of functionality exist with seldom objections upon specifications that don’t sit well with certain customers. That aside, it is truly a king among hitch mount racks and is preferred by bikers all over.