You can often identify a hardcore cyclist or an elite marathon runner by looking at their legs.  Given the type of workouts they do, and the body types that are naturals at each sport, cyclist and runner legs often have a consistent profile.

Cyclists are known for their incredibly ripped and vascular legs, but for cyclists the muscle development often isn’t as balanced.  Runners often have the appearance of leaner legs, but their leg work is often more balanced to all muscles.

Let’s take a closer look at why cyclists and runners have the legs they do and see why there is such a discrepancy between the two groups.

To analyze how a longtime endurance runner’s legs might differ from a longtime cyclist’s, it is important to know how the two sports are different. 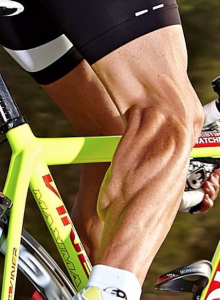 First, the training involved in both can be intense, but the natural demands of cycling, with hills, stops and starts, and built-in sprints makes it even more of a muscular workout.  Running is often done at a tempo…. but notably, sprinters’ workouts are an exception.

Second, the heart and lung effects – VO2 max – are often more demanding on runners than cyclists, limiting how long they can go all-out.  As an aside, it is interesting to note that running cardio conditioning carries over to cycling better than vice versa.

Third, running tends to use more leg muscle groups than cycling, which means you often get a more balanced workout with no one muscle group overdeveloping.  We will get into that more in a second.

Most of this article is geared toward endurance athletes, so longer-distance runners and cyclists.  However, it should be noted that endurance runners and sprinters are very different in how their legs develop.

Most sprinters, over time, actually develop legs that might look similar to an elite cyclist.  There is lots of focus on glute and quad development.

The quads are the biggest muscles in the body, and they make up a large part of a cyclist’s leg muscle. To be a good cyclist, your quad strength needs to be outstanding, especially for the uphill 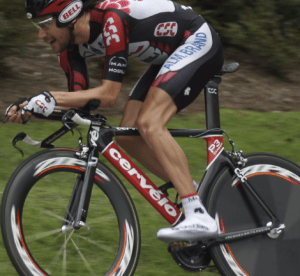 climbs. That gives cyclists the “teardrop” shaped quad muscle right above the knee. This shape is widely known among cyclists, and many find it to be aesthetically pleasing and the desired shape.  This quad development is especially noticeable in people who might have spin and HIIT-heavy cycling regimens, like those who do spin classes or rides on an indoor bike trainer regularly.

Runners, on the other hand, still engage with their quads but not to the same extent.   They don’t need to have nearly the same amount of quad strength. When running, the hamstrings, glutes, hip flexors, calves, and core muscles are used together to propel yourself quickly. Training and developing all these muscles is important for overall performance, which means the quads don’t need to be as strong since they’re not doing most of the work.

Running taps in to many different leg muscle groups. If using good form, a runner will use the quad, hamstring, glutes, groin, and the front and back of the calves.  Everything is in play.  The result though, unless someone s a sprinter, is that no one muscle group will dominate.  A balanced – almost boring – leg is what wins running races.

Cycling taps largely in to two muscle groups — the hamstring, and the glutes.  While not as balanced, it will develop the quads and glute to a point where they will be more refined and have that ripped look.

Shorter, muscular legs are often better for cycling than running

When running, speed = stride length + stride frequency.  A runner with long legs and fast twitch muscle fibers is gifted, and able of training their way to become an elite endurance runner. 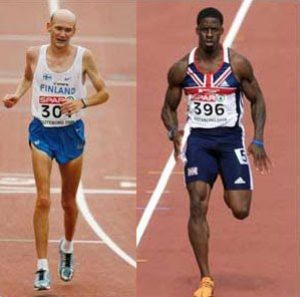 Someone with short, meatier legs might struggle to keep up in a 5K, but could do quite well on the bike. Cyclists need to quickly pedal in tiny circles quickly and with a lot of force, which requires a lot of leg strength. This is especially true for professional cyclists who are constantly training and competing at a high level or those who cycle on uphill terrain.

Runners don’t need to be as strong in the quads since they’re not doing the same type of short bursts of movement. They need to be able to run long distances, but they don’t need to generate the same amount of power. This makes running more geared toward endurance exercise, whereas cycling is more of a power-based sport.

This is one of the most noticeable differences between cyclists and runners. You’ll find that cyclists usually have vascular legs, which is a result of all the blood that’s being pumped to the muscles when they’re working intensively hard to pedal quickly. A common term among cyclists is having “spider veins” on their legs, which is where the blood vessels are so close to the surface of the skin that they appear to be spider webs. It’s very similar to lifting weights at the gym.

Runners won’t have as much blood flow to their legs since they’re not doing the same type of intense exercise, although it can still be intense. This lack of blood flow compared to cyclists is why runners tend to have less vascular legs. However, some runners may be more vascular than others depending on their genetics and how much they train. A quick tip to appear more vascular is to shave. Shaving the hair on your legs or any part of the body will make the veins more visible.

The notable exception, though, is sprinters’ legs, which can be very vascular and have lots of muscle.  But endurance runners usually have much leaner legs.

If you’ve ever seen professional cyclists or even amateur cyclists in person or through video, you’ll notice that their legs can look a lot like bodybuilders. This is because of the two main types of muscle fibers: slow-twitch and fast-twitch. Cyclists use more fast-twitch muscle fibers to generate more power at higher cadences. Bodybuilders also use more fast-twitch muscle fibers to build bigger muscles while weightlifting. This is why you’ll see a lot of similarities between the two groups, such as ripped and defined legs.

Runners use more slow-twitch muscle fibers, which are used for endurance exercise–ideal for long-distance training. This results in runners having smaller legs, at least compared to cyclists and bodybuilders. But in terms of performance, having good definition isn’t necessarily important, so having smaller or less defined leg muscles may not matter at all. Both cyclists and runners condition their muscles to perform well in their respective sports, and they both still have amazing physiques. It just depends on what you’re looking for when comparing the two. 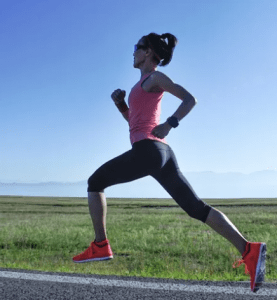 Although it’s rather clear now that cyclists typically have bigger legs than runners, it’s important to note that runners can develop the same type of legs if they train specifically for it. The type of training is rather straightforward as most people in the fitness industry already know. To get bigger legs, runners are going to need to incorporate strength-training exercises that focus on building muscle mass, especially in the quads, calves, and hamstrings. These types of exercises would be things like squats, deadlifts, and leg presses.

In addition to weightlifting, runners can also do sprints and other types of high-intensity interval training (HIIT) to help them build more muscle mass and definition. Running uphill is a great way to get bigger legs since you’re required to generate more power with each step. It may be difficult for runners to strength train and continue doing long-distance training since they’re two very different types of exercise. However, this is one sure way to build legs that are more similar to cyclists.