Unless you have been in a cave for the past five years, you have undoubtedly noticed the Rise of the Wearable.  In the athletic world, wearables serve many purposes ranging from high-tech training monitoring, to an important weight-loss tool, to novelty.  it took a while for triathletes to find a line of wearables right for them, but in the past two year a great lineup of triathlon watches have been offered by several makers.  Wearables are here to stay, and when it comes to the world of wearables in athletics and fitness, Fitbit leads the way followed by brands like Apple, Garmin, and Samsung. 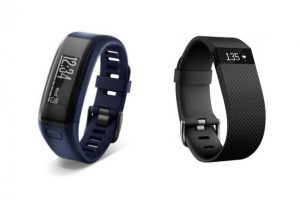 While the Garmin Vivosmart (left) and the Fitbit Charge HR (right) are about the same size, the similarities end there. Features and user interfaces have several key differences.

A company that is only 9 years old, Fitbit has taken the world by storm with its advanced technology of wearable wireless devices that track your heartbeat, sleep, the number of steps, etc.  Avid fitness enthusiasts as well as people new to fitness find that Fitbit makes many different devices that can cater to their specific needs, all the while providing a few budget options. With fitness trackers ranging from as low at $60 to nearly $300, Fitbit has created enough options to serve the entire range of the market, whether you are a hard-core marathoner or simply trying to shed 10 pounds.  The technology has grown significantly in recent years, and as MIT recently noted, are now not only a workout novelties but have become true health devices as they help monitor serious medical conditions.

Is there a downside?  Sure.  With such a wide range of options as well as such a huge difference in price point, it can get a bit complicated as to which wearable is right for you. We have seen more than one person buy a gadget that does much, much more than they actually needed, and as a result they paid for features they never needed.  Considering the number of features included on some trackers, it is easy to become a bit of a gear junkie.  That is fine if it is what you need, but it is best to purchase exactly what is right for you, which is where this article comes into play.

What to Look for in your Fitbit

As with anything gear-related, the right fitbit is not a one-size-fits-all for runner, triathletes, and other athletes. Instead of wasting money on something that will not be suited to your use, it is best to understand what your requirements are so you can look for those features in the tracker.

We thought we would put three of the most popular Fitbits to the test, head-to-head.  When we talk to weekend athletes, runners, or hard core cyclists and triathletes, these are the three models that seem to come up again and again.  Depending on your specific needs and intended use, the right Fitbit for you will vary.  We will try to remove the mystique and let you know what makes sense for you to invest in.  Here are three of the most sought after and famous Fitbit trackers and their respective features. 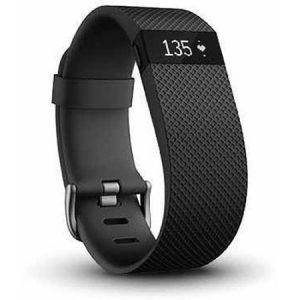 We really like the Fitbit Charge HR, but wish it had GPS.

The FitBit Charge HR is a beautiful and sleek device that features a plethora of intriguing features guaranteed to serve the needs of all fitness enthusiasts. Though it is a bit up there regarding pricing, it gives you a bang for your buck. The Charge HR is the one you will most often see as listed as the best Fitbit for the money.

It features real time Heart Rate monitoring which gives a far more accurate and reliable estimate of calorie burn during workouts. The added feature of Caller ID makes it easier to answer phone calls while you run or work out. This particular model also has Smart Track, which allows it to recognize when you are exercising and record it in the app. It also wirelessly syncs the data with the app.

Measuring to be 21mm wide, with a decent sized OLED display, and a durable and an elastomer band, the Fitbit Charge HR is rather popular amongst both fitness experts and enthusiasts. However, bearing in mind all of these good features, it is very important to remember that the Charge HR is not swim proof, which can make it a nuisance for swimmers who wish to track their fitness. Considering some of the newer designs that Fitbit has to offer, the Charge HR can also appear to be a bit bulkier than the rest. This may also be an issue for those who prefer sleeker fitness trackers. 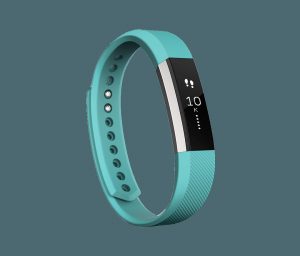 The Fitbit Alta wins the award for being sleek and stylish.

When it was first released in March 2016, it was critically acclaimed for its sleek and stylish design. Considering that it also features swappable bands, it is easy to see why it became more popular amongst people who enjoyed a more elegant look, especially in their fitness gear. The extra bands are rather expensive but are still quite sought after.

The Fitbit Alta has many features in common with the Charge HR. Both feature tracking steps, distance, and heartbeat, etc. Both record sleep as well as exercise and active minutes. What sets this wearable apart from its many competitors is a unique feature that comes in the form of a “Move” notifier. This notifier is meant to make use of the data recorded by the Fitbit and determine if it has been too long since the wearer has been active enough.  The notification allows the wearer to keep active throughout the day and remain fit.

Considering its slightly more upgraded display, it displays notifications such as text messages and phone calls which allow the wearer to keep in check with the phone without having to stop the workout.

Unfortunately, all these good features come along with a few downsides. Not only is this fitness tracker not shower or swim proof, but it also does not come with a Heart Rate Monitor.  For some, this is not a big deal.  For others, it would fail to deliver on one of the very reasons you would buy a Fitbit. 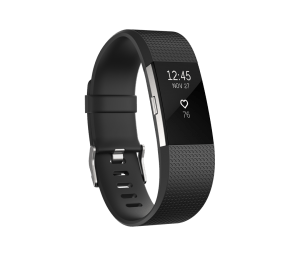 Best for cyclists and runners, the Fitbit Charge 2 has lots of great features.

Quite easily the priciest amongst the three, the Charge 2 comes with a lot more options and features to justify the steep price point. It is the most selling and the most famous fitness tracker that Fitbit sells, and that too for quite a few reasons.

Much like the Charge HR, this too features a Smart Track feature that allows recording and syncing of activity and exercise, as well as heart rate monitoring. Much like the Alta, it also makes use of the much appreciated “Move” notification that keeps the wearer active throughout the day. It features a lot of what the Alta and Charge HR offers, such as sleep tracking and a silent alarm.

What sets it apart from the other two is the fact that it has features such as GPS tracking, which is especially beneficial for cyclists and runner, as well as a Multi Sports mode which allows for specific different exercises to be separately tracked. It also can notify the wearer of calls, text messages as well as emails. Perhaps the best part about this device, however, is the new feature of Guided Breathing sessions. This new technology by Fitbit ensures that the wearer get a few minutes of calm and peace during the day to make sure that both body and mind are well rested and clear.

The design on Charge 2 is pretty similar to the design of Alta. A much bigger display and a more upgraded design make this model far superior to its predecessors. 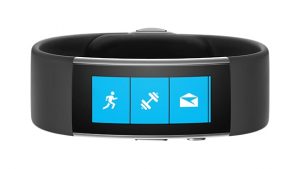 The attractive MS Band 2 is worth your consideration.

The three Fitbits that we tested here were the ones that we get asked about the most.  We wanted to take three Fitbits head-to-head.  You will notice that we commented that all three were not waterproof.  If you plan to use your Fitbit for swimming, would like to keep it on in the shower, or use it during rainy runs or hikes, you really need to look at the Fitbit Flex 2.  It is simpler, goes for just $99, but has the potentially huge benefit of being waterproof.

OK, so it isn’t a Fitbit.  But if you are in the market for a wearable, you really need to include the Microsoft Band 2 in your search.  Its technology has largely caught up with what the Fitbit is doing, and we think they are really putting out a good product.  At about $250, it prices out toward the top-end of the market, but discounts can often be found here.

The upside of Band 2 when comparing to the Fitbits is that it offers more complete data collection, a generally better, flatter fit (but that is always subject to personal preference) and we like the screen resolution much better.  The downside, in addition to the cost, is a pretty low battery life of about 1.5 days.  Compare that to the Alta at nearly 5 days, and it is a factor in any purchase decision.

What About the Garmin? 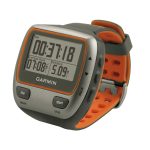 A Garmin Watch has a much larger face, but is really only meant to be used during workouts.

We sometimes get asked the question: “Should I buy a Garmin GPS watch, or a Fitbit?”  That is a hard question to answer without knowing a lot more detail about the particular situation.  You see, the Garmin and Fitbit lines are pretty different from each other.  Fitbit is intended to be used around the clock, giving you data on many aspects of your health.  The Garmin watches, on the other hand, are really meant for working out.  They are bulkier, but focus directly on the core parts of a workout – speed, HR, pace, etc.  If you want a wearable for your runs and bike rides only, go with a Garmin watch.  If you want a wearable so you can track your overall health, you want a Fitbit.

The reason people buy the Fitbit is primarily for the data it can give you, which means the software is just as important as the gadget itself. The iOS and Android app is easy to operate and makes tracking your fitness and routine a piece of cake. Ultimately, everyone’s requirements from a fitness tracker are going to be different. This is why all of Fitbit’s devices can cater to all sorts of people all over the world. Depending on what you want from a fitness tracker, enough research can ensure that you purchase the one suited to your needs. Overall, we believe some type of wearable is a useful device to anyone interested in training, weight loss, or just general fitness.

Now for the moment of truth:  No comparison article is worth anything if it doesn’t come down to a recommendation?  You are saying “I get that each wearable might be better for various situations…. But if you could only choose one, which one would you choose?”  We won’t evade the question.  Of the lot, we like the Fitbit Charge 2 the best.  It gives you the functionality you need, and if you are a triathlete, cyclist, or runner in training, we think you would be disappointed by the other two.

How to Remove Rust From a Bike

How Much Does It Cost to Ship a Bike?