Using a triathlon wetsuit becomes old hat after a few races, and you will never know what you ever did without it. It will feel like a second skin that gives you speed and security in the water. But any triathlete will tell you a few mistakes they made with their wetsuit, things that were relatively simple and perhaps a bit embarrassing. You can learn from their mistakes so you don’t repeat them on race day.

Based on dozens of races in wetsuits, and even more practice swims in them, here are three wetsuit mistakes that triathlon rookies often make. 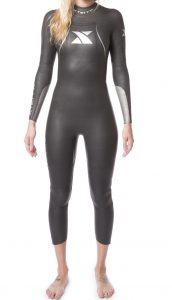 The snug feeling of a wetsuit can take a little getting used to.

Not Using the Suit Before Race Day

The worst time to try using a wetsuit for the very first time is on the morning of your race.  It is very important to use the wetsuit, if even only once, prior to race day.  As they say, practice makes perfect, and the old mantra of “nothing new on race day” is accurate.

Try your wetsuit before your race.  Doing so will make sure that you know how to put it on, know what it should feel like and should not feel like.  A wetsuit can feel a bit constricting the first time you use it — kind of like how compression socks actually feel too tight at first but then you get used to them.  Let your body get used to what it feels like and how to do your swim stroke with it on.

Other little things, such as understanding how to pull the wetsuit on correctly or even that the zipper goes in the back, are better to work out in practice rather than on the morning of the race.  Plus, it sometimes takes a little work to get a wetsuit on, so best to try it during a practice run than panicking on race morning.  Be sure that your pre-race checklist includes inspecting and trying your wetsuit on.

Putting Your Wetsuit On at the Wrong Time

This one can go a few ways, but we’ve seen many racers make mistakes on the morning of the race regarding when they put the suit on. If you put a wetsuit on too early, and you have to sit and wait 60 minutes for your heat to begin, the suit could actually drain your energy.  Sitting in the morning sun with the heat hitting the black wetsuit neoprene could definitely zap your energy.

If you don’t allow at least a few minutes, you run serious risk of not getting it on well by the time you are starting.  If you put your wetsuit on but have not done some basic things such as use the bathroom, you might be wishing you had once you are off and racing.  Whatever the case, make sure that you put your wetsuit on about 15-20 minutes before your heat / wave begins. That will allow you to put the wetsuit on in a relaxed manner, and work out any kinks in the suit, while not creating any mad rush to get the wetsuit on as your race is beginning.

Getting the Wrong Size

Most racers who do their homework will settle on a sizing that works well for them. But people who buy in haste or borrow a wetsuit from a friend could end up using one that is the wrong size. Wetsuits that are too large lose much of their insulative and buoyant qualities. Wetsuits that are too small restrict breathing and arm and shoulder movement. Sizing is important when it comes to wetsuits!

Do not compromise on size — it just is not worth the risk of limiting your range of motion or having a wetsuit that doesn’t do its job well. Th other important factor in picking the right wetsuit is making sure the the wetsuit is made specifically for triathlon.

There are more possible pitfalls than these three, but hopefully this helps you avoid a few rookie mistakes.