Orca has come a long way since Kiwi age-grouper Scott Unsworth began selling his ‘speedsuits’ from the back of his car in 1992 at local race events.   With an unsurpassed Olympic (and not to mention Ironman) pedigree, Orca continues to provide innovative wetsuit designs for today’s top triathletes.  For 2013, the Orca lineup boasts 5 suits, each available in both men’s and women’s sizes and full-sleeved and sleeveless models.  There have been some replacements in recent years, particularly at the lower-end of the lineup, all in an effort to improve the wetsuit technology for racers at lower price points.

The 2011 wetsuit lineup from Orca includes two top-of-the line models: the Alpha and the 3.8.  Both suits utilize 1.5mm Yamamoto #40 neoprene as well as Orca’s most advanced fabric technology, known as ExoCell.  New for 2011, ExoCell is Orca’s most buoyant fabric yet – a laminated neoprene that is claimed to be 25% more buoyant than the Aerodrome fabric it replaces on these top tier suits.  Both suits also feature molded Aquatread forearm panels to improve stroke power through the catch.  Both suits also make use of Yamamoto’s latest super slick coating, nano-SCS (Super Composite Skin). 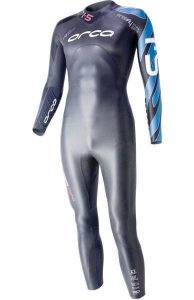 The Alpha sits at the top of Orca’s lineup.

The Alpha is the ‘swimmer’s’ wetsuit –ExoCell fabric in the butt area provides extra buoyancy where you need it most, while the rest of the suit features 1.5mm #40 Yamamoto nano-SCS neoprene for a second skin feeling.  We hear of many top triathletes who insist that the the Alpha may be the top wetsuit on the market, rivaled perhaps by the Blue Seventy Helix.  Whatever the case, it is a top wetsuit that most athletes will fall in love with.

The Alpha has a first cousin in the Orca lineup that shoudl be considered as well.The 3.8, in a slightly different twist, features an enhanced buoyancy for those who of us who need a bit more help.  In addition the butt panel, the 3.8 also have additional ExoCell panels on the chest and calves.   It also incorporates HydroLift buoyancy panels in the forearms for passive stroke correction.

The Sonar is Orca’s best-selling wetsuit.  It’s a mid range suit that’s geared towards an athlete that’s ready for the next step.  For 2011, Orca’s added its Aerodrome laminated neoprene buoyancy panels to the back and calf areas of this suit.  The Sonar also features HydroStroke Forearm Panels, which have a silicone printed texture to enhance stroke power.  The balance of the suit is constructed from 2mm Yamamoto #39 neoprene with SCS coating for minimum glide resistance

The Equip uses 2mm Yamamoto #39 from the waist up, and extra buoyant 5mm Smoothskin neoprene panels for the legs and lower torso.  It also features the Hydrostroke Forearm panel.   The Equip has a broader more comfortable fit, and for 2013 we see some enhancements in the material and construction that make the new Equip a step up from those made in prior years.  We recommend looking at the equip in conjunction with the Sonar, to make sure you get the one tailored for your body.  While the Sonar runs about $100 more than the Equip, for many racers the equip may be all that you need for strong performance.

The S4 has a 5mm Smoothskin neoprene construction with a generous fit.  Additionally, it uses the same Hydrostroke forearm panel technology found on Orca’s mid range suits.  The S4 is very popular for those who are new to the sport or on a tight budget.